Continuing the tradition of honoring Redbird family members with the Faculty/Staff Appreciation Luncheon. During the event, Years of Service honorees as well as Civil Service and Administrative/Professional scholarship recipients will be recognized.

Loyalty Circle donors are invited to enjoy a reception with light refreshments prior to the Bell Ringing Ceremony.

Nominate a Bell Ringer by January 17. 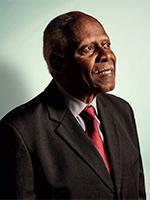 Andrew Purnell arrived on campus in 1953, interested in engineering. He studied industrial arts, switched to math as his major during his junior year, and graduated in 1957. Beyond working to cover his college expenses, Purnell was active in intramural wrestling, fast-pitch softball, and bowling. He was inducted into Iota Lambda Sigma, an honorary fraternity, and served on the advisory boards for his class as a junior and senior.

Purnell joined peers in forming the University’s first NAACP chapter. Members tested public accommodations for African Americans in Bloomington. The local roller rink and YWCA allowed access to black residents only once a month at the time, with restaurants refusing service. A meeting with the McLean County State’s Attorney resulted, with a promise that unlawful discrimination would end.

Purnell was drafted into the U.S. Army. He trained in Colorado and did classified government work at Aberdeen Proving Ground in Maryland. He declined a job with NASA, choosing instead to complete a master’s degree and pursue a career in education. He taught math and served as an administrator in Illinois at Eisenhower High School and Alan B. Shepard High School.

In 1983, Purnell began working to create the Illinois State University Black Colleagues Association, which was chartered on campus in 1984 with 40 participants. Membership has risen to nearly 300 and more than $280,000 has been raised to provide black students with scholarships.

Purnell has served on the University’s Alumni Association Board and various campus committees. He has been inducted into the Steve and Sandi Adams Legacy Hall of Fame and received the Alumni Association Mercier Outstanding Service Award. In 2013, he was chosen as the alumnus Homecoming king.